On October 12, WFAS B&R tour of acupuncture-moxibustion (Saint Petersburg, Russia) -Opening Ceremony and Cooperation Agreement Signing Ceremony of the "Exhibition of TCM acupuncture-moxibustion" Intangible Cultural Heritage of Humanity was successfully held in the Chinese Hall of Business Park of China and Russia in Saint Petersburg. More than one hundred people attended this activity, including TCM experts, mainstream people of all circles in Russia and local officials. 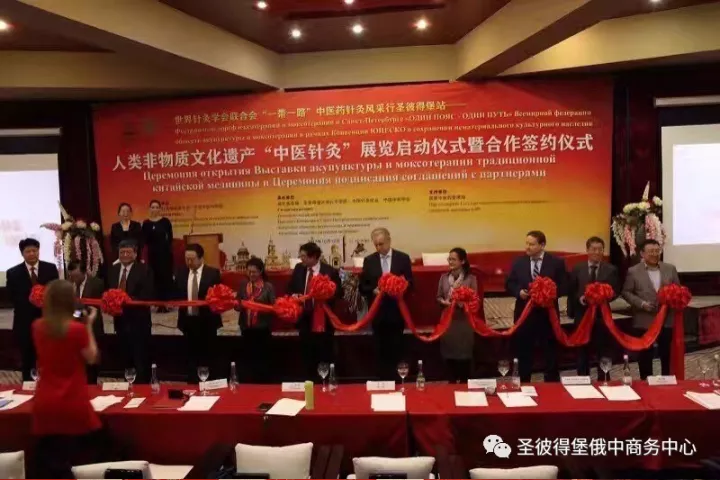 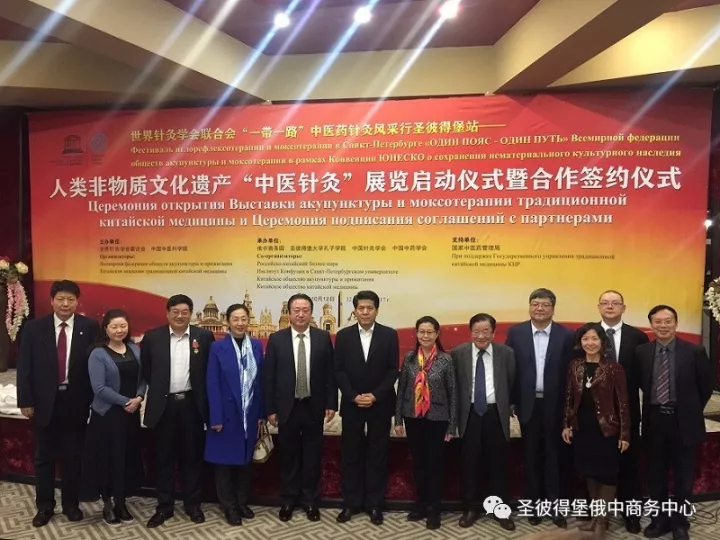 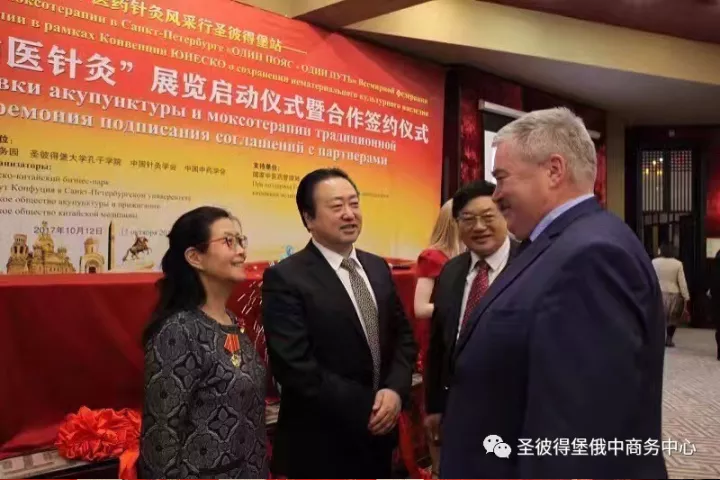 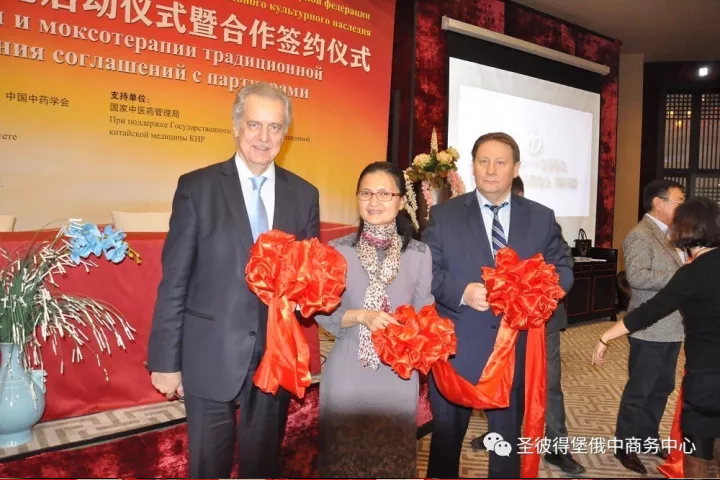 This activity was co-organized by WFAS and Chinese Academy of Chinese Medical Sciences (CACMS) around the hot topic of the benefits of TCM & ACU-MOX - the representative of cultural exchange between traditional medicine - for human health. During this activity, attendees discussed the combination and interaction between traditional medicines like TCM & ACU-MOX and modern medicine, latest news about the research and clinical practice of ACU-MOX, academic exchange and experience sharing. Besides, the historic development of TCM culture was also presented and explained by using both the words and pictures.
Su Gangqiang, Director of the Department of Planning and Finance of State Administration of Traditional Chinese Medicine (SATCM), Luo Xin, Chinese Commercial Consular to Saint Petersburg, Russia, Liu Baoyan, President of WFAS, Wu Dong, Vice-president of CACMS, Fang Shuting, Chairman of China Association of Traditional Chinese Medicine (CATCM), Chen Zhigang, Executive Chairman of the Development Academy of "the Belt and Road" Strategy in China and Russia, Oleg Ivanovich, President of International Department of Saint Petersburg, Alexander Ballisjevic, President of Policy Department of Saint Petersburg, Ilyich Eduavci, President of the Federation of Medical Experts, Health Protection Commission under the 6th State Duma of Russia, Zhang Rukui, President of Confucius Institute in Saint Petersburg, Director of Information Department of Prevention Science Center under the Health Committee of Saint Petersburg and government officials of Leningrad Region all attended and addressed the opening ceremony.
During the opening ceremony, WFAS, CATCM and Development Academy of "the Belt and Road" Strategy in China and Russia signed a strategic cooperation agreement. These three parties reached a consensus to build a "the Belt and Road" TCM Cultural Development Center in the Business Park of China and Russia in Saint Petersburg. Yancheng Hospital of TCM and Saint Petersburg Modern Medical Technology Hospital reached an agreement to build a cooperation hospital. In addition, Dutch Shenzhou University of TCM signed a cooperation letter of intent with Business Park of China and Russia.
Yang Jinsheng, Cashier of WAFS and Principal of the Program of Intangible Cultural Heritage of Humanity under China Association for Acupuncture and Moxibustion explained to the attendees in the aspects of "the history of ACU-MOX, meridians and acupuncture points, acupuncture techniques and its development at home and abroad", enabling more people to know, to believe, to use, to advertise ACU-MOX.
Hu Jingqing, Director of the Institute of Basic Research in Clinical Medicine delivered a speech titled " Key Points of TCM Health Preservation for the Middle-aged and Elderly" on the Lecture Hall of TCM Health Preservation, which was quite wonderful.
This activity had remarkable achievements. During the exhibition, Li Hui, Chinese Ambassador to Russia visited the "Exhibition of TCM acupuncture-moxibustion" Intangible Cultural Heritage of Humanity, accompanied by Guo Min, Chinese Consul General to Saint Petersburg, received Chinese experts and members of the organizing committee of this activity and expressed his congratulations for the success of this activity. Ambassador Li also hoped that the Business Park of China and Russia and WFAS could cooperative actively to contribute to the establishment of "the Belt and Road" TCM Cultural Development Center as soon as possible, so as to better serve the people of Russia and China and bring benefits to human's health. 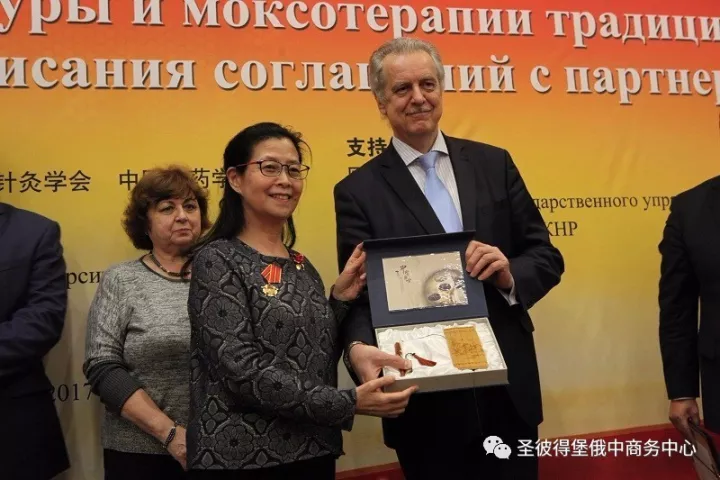 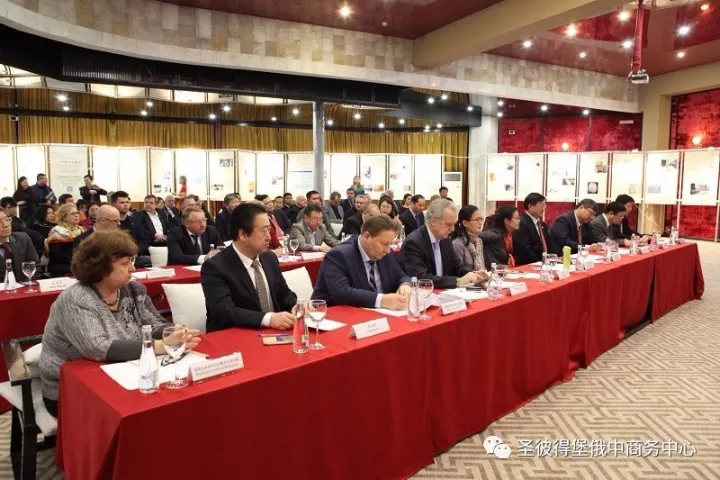 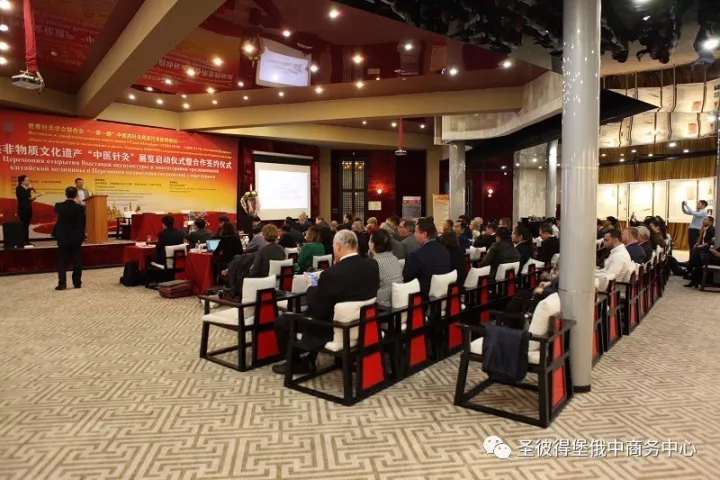